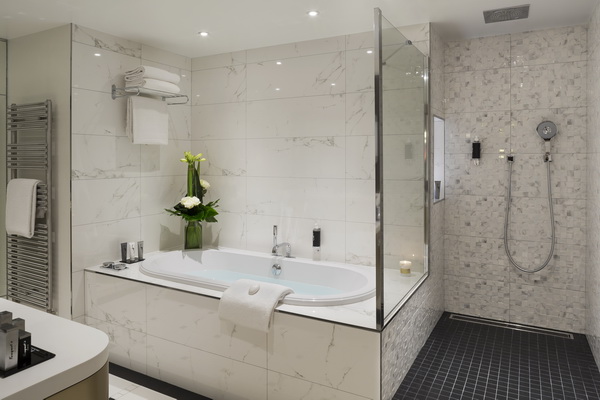 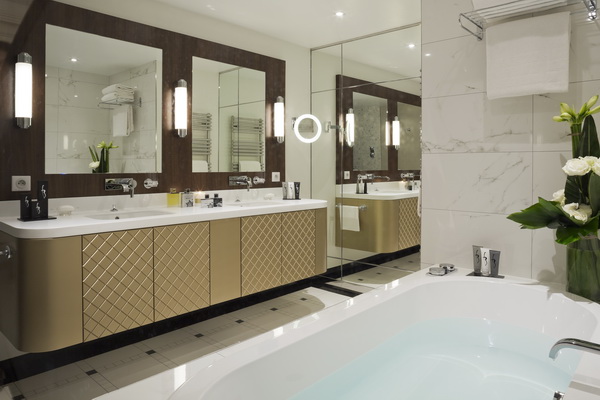 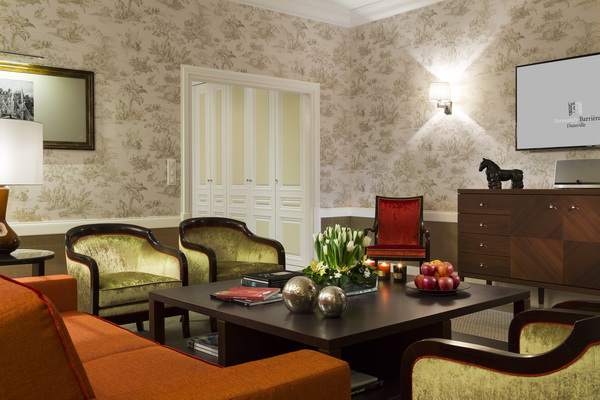 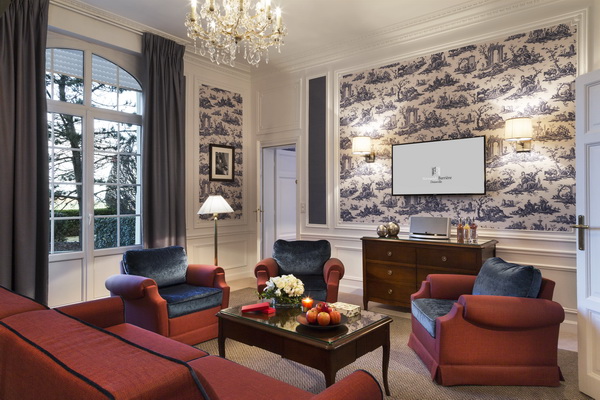 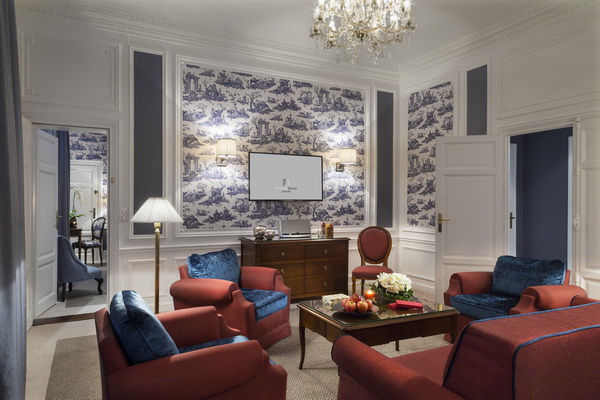 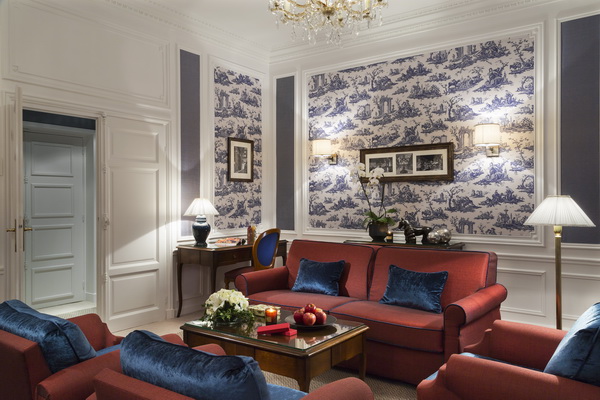 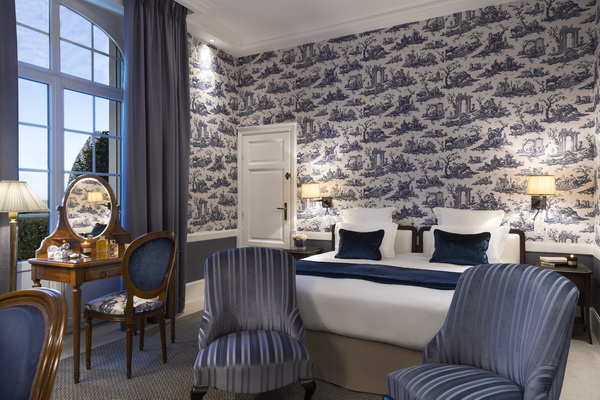 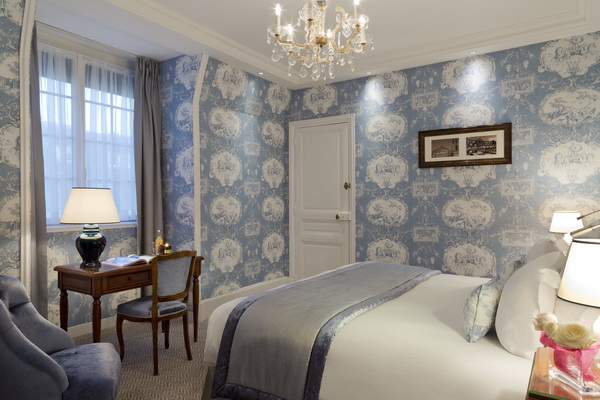 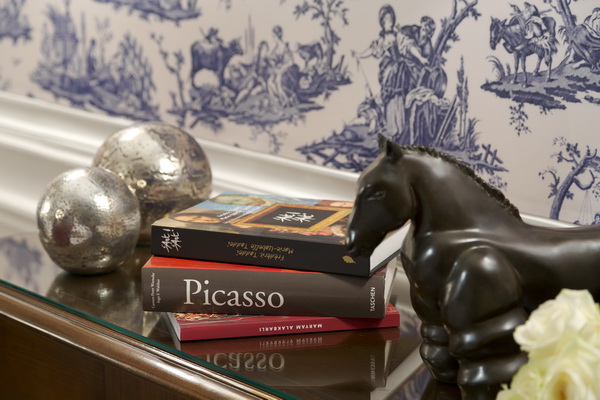 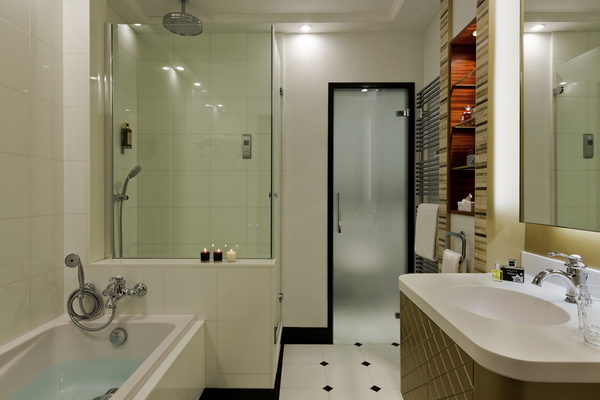 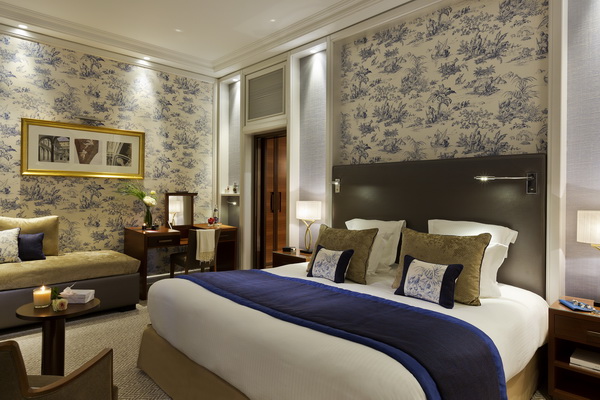 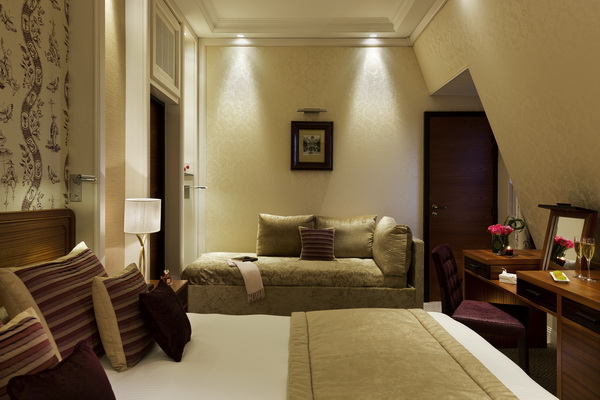 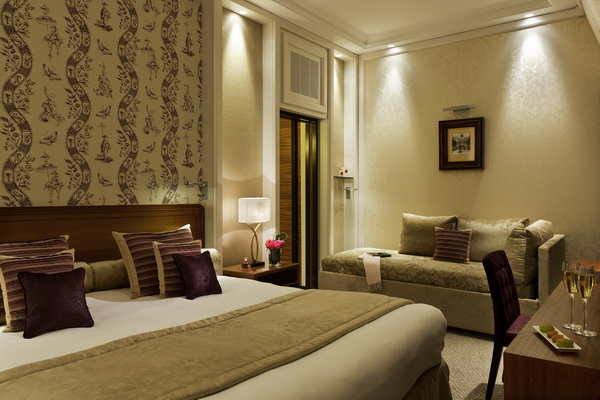 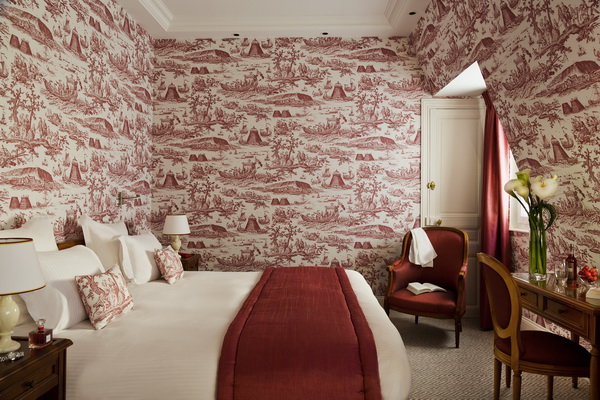 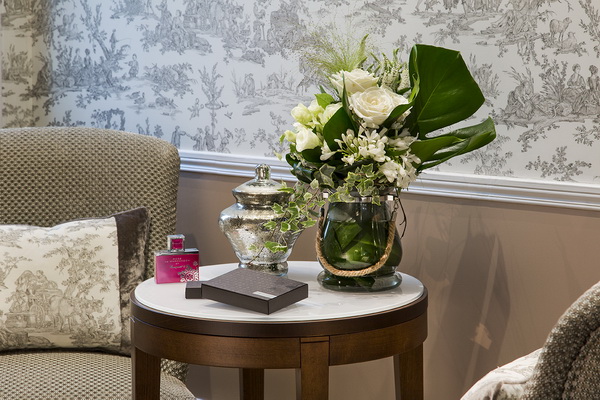 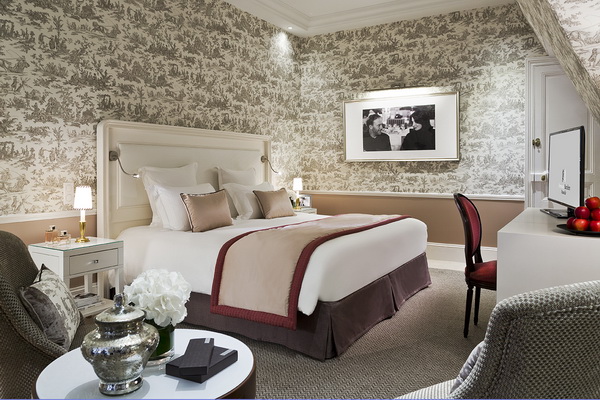 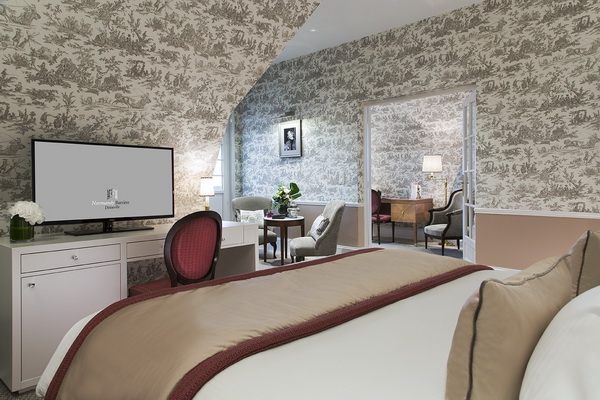 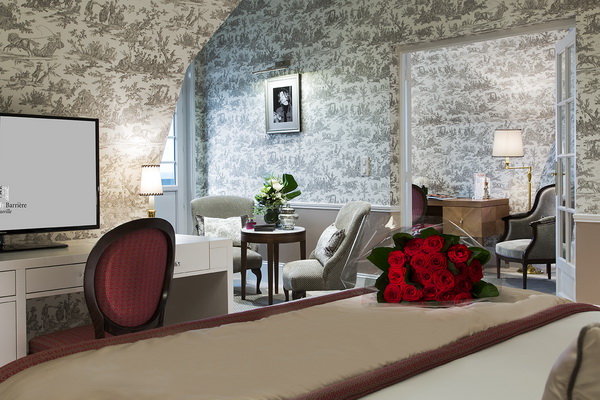 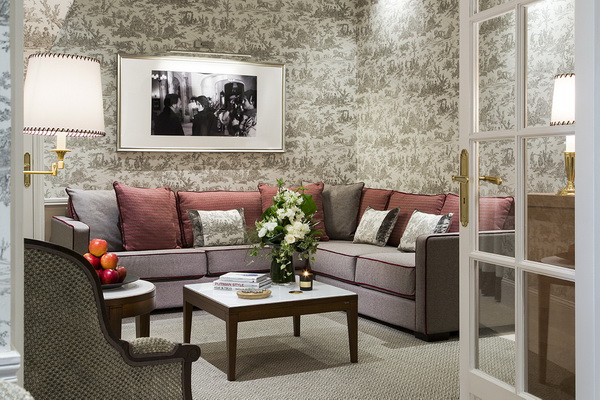 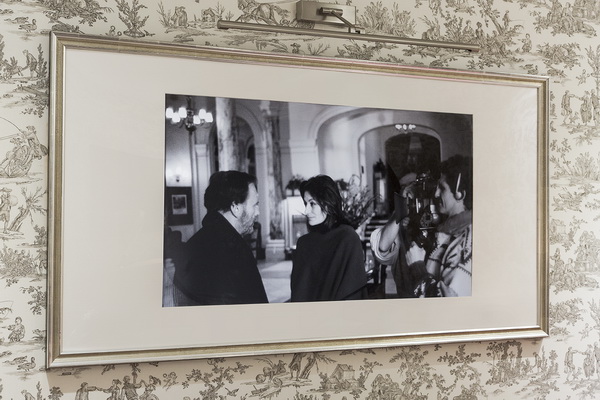 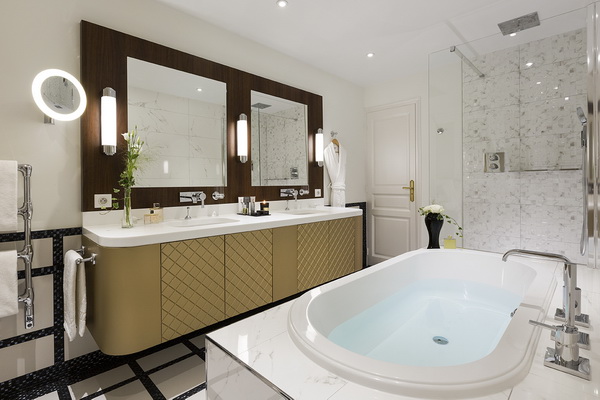 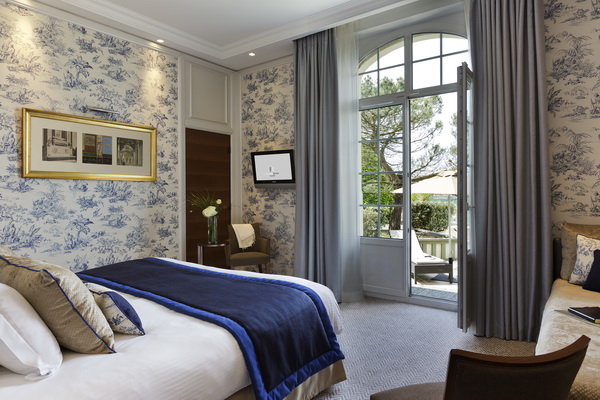 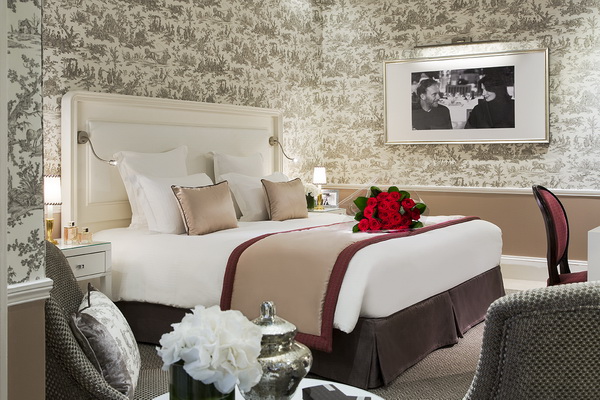 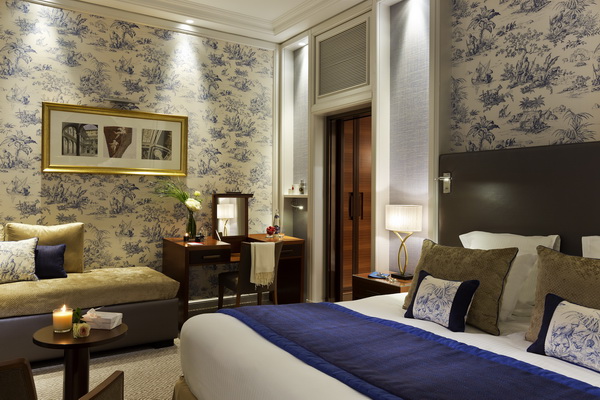 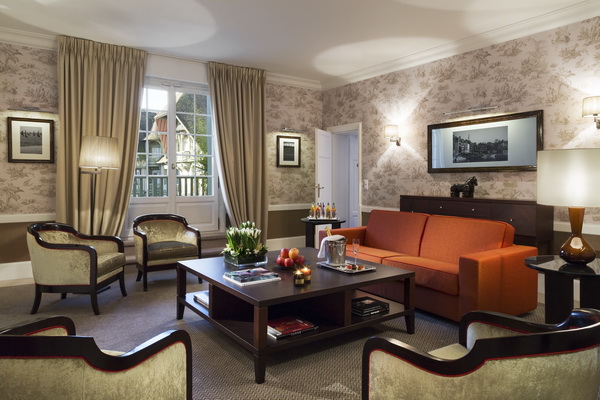 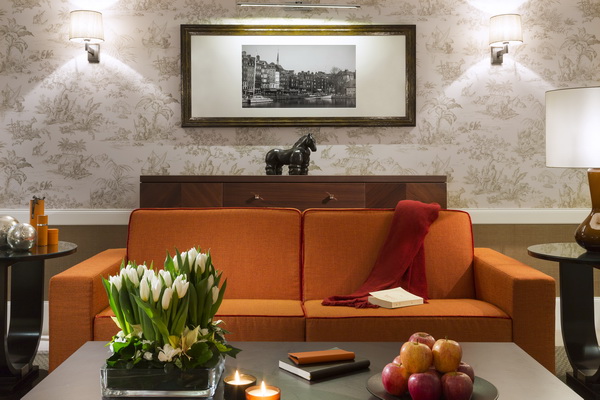 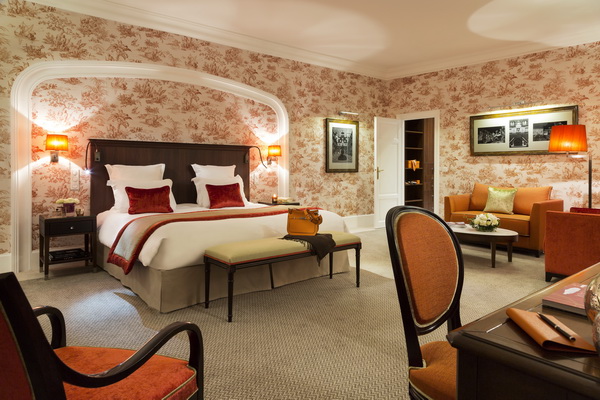 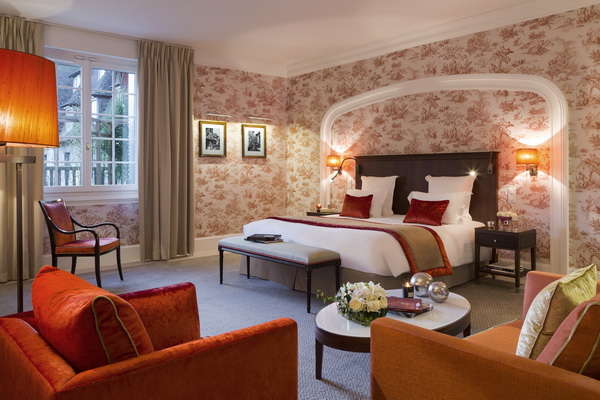 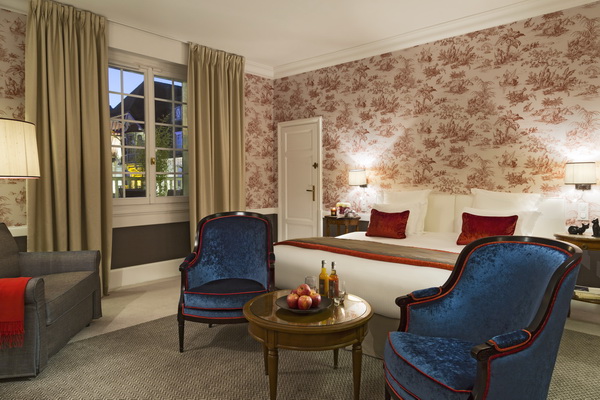 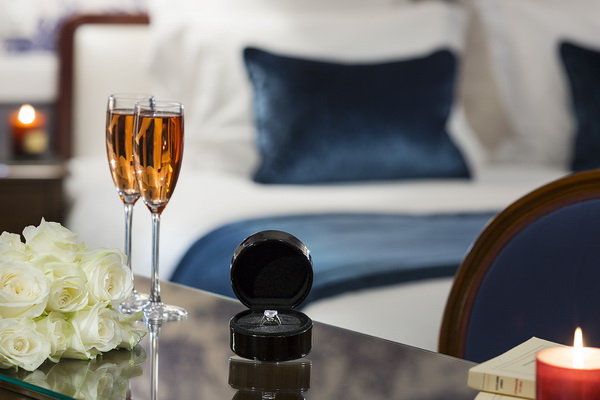 The hotel was built in 1912 in the traditional style of the Anglo-Norman manor complete with pastel green timbering.

As part of the renovation plan, the hotel sought to preserve the authenticity of its history by keeping with the tradition of the Toile de Jouy pattern, while also transforming the rooms to something befitting of the hotel’s five star standard

The patterns of the Toiles de Jouy were made in collaboration with a fabric specialist in order for them to be of the utmost delicacy.

The bathrooms were completely renovated with classic white floors and black cabochons or a mosaic work of beige marble. The antique gold lacquered wash basins, combined with the caramel wooden wall units give a contemporary touch in this classic atmosphere.

The suite “Un homme et Une femme” was designed based on the 1966 French film of the same name. The original pattern of the Toile de Jouy, known as “le Delice des 4 Saisons”, was reinterpreted for this room with an approach to the colour sepia. This colour was chosen specifically to hint to the moods of the film, which was shot mostly in black and white

The headboard is identical to the one in the film, along with the two night stands. The classic black and white bathroom has a few contemporary touches, such as the iridescent golden lacquer of the wash basins, which completes this room.

The adjoining living room, decorated with a sofa of soft pink accents, harmonizes the suites colour palette while giving it light and romance. The walls are covered with photos from the movie, bringing this suite back in time for a romantic weekend getaway.

Air hub by Faber - aspirator that cleans our home

Air purification in the house is becoming more and more important when we talk about choosing items for our home - that is why this aspirator has aroused special interest in us.

HOMI, the Lifestyle Exhibition, dedicated to lifestyle and home decorations, initially scheduled for January 2021, has been rescheduled to 5 to 8 September at fieramilanocity and M...

HOMI, the lifestyle trade fair: the event is reconfirmed and full of new features

The only Italian event dedicated to home decor is back and offers firms a multi-channel visibility platform, strengthened by its #HOMIcommunity. Making a simultaneous return is Fes...

World promotion of Made in Italy - HOMI Lifestyle

The exhibition, scheduled for 19-22 September 2020 at the Fiera Milano (Rho), will be the only Italian appointment in the sector for 2020. An opportunity to start again and take st...

HOMI & HOST - design as a new theraphy after the lockdown era

HOMI and Host launch the new mission for designers and architects in the post lockdown era, presenting concepts to make the “new normal” more pleasurable and proposing Design as a...

These past few weeks, balconies, terraces and open areas of the home have proven to be versatile and invaluable. At HOMI in September there will be special focus on Outdoor living,...

Beloved and unique – house we live in. Our house is the place we turn to at this stage in our shared history.

How Poggesi arranged the garden of Dior cafe

To better express this historic spirit, the entire Dior cafe space is inspired by the look of Toile de Jouy wallpaper, the iconic 18th-century French design that adorned the walls...

Sneak a peak into the renovated Philadelphia Art Museum

The first phase of a thorough renovation of the Philadelphia Art Museum is complete and it was realized by Frank Gehry buro.

KUBE - an installation revealing a different face of Hong Kong

HOMI, the famous lifestyle fair, which shows us the latest trends and styles in the world of interior design, will be held at the Milan Fair from January 24 to January 27.

If you love enjoying yourself in nature and despise grandiose hotel complexes, than glamping in Homoki Lodge resort in Hungary is made for you…

Ahead of the most prestigious furniture fair, Salone del Mobile.Milano, we have talked with president and representative of this esteemed event...